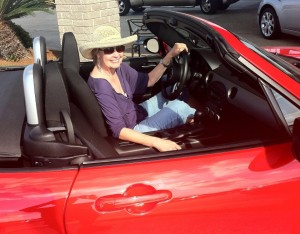 Lory Lockwood is an artist who specializes in automobile and motorcycle fine art that she paints in a style called Photorealism. This contemporary style exudes a power of obsessive detail that focuses on chrome reflections, bright colors and abstract patterns.

Car and motorcycle enthusiasts can also commission a personalized portrait from Lockwood.

Listen to an Interview with Lory Lockwood 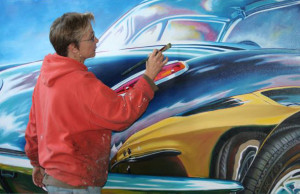 The following are excerpts from a review of her 2007 show, Cultural Icons:

“Lory Lockwood is a painter gifted with a chromium touch, an ability to make the arcane art of oil paint on canvas resemble the glossiest product photography imaginable. Her paintings of the sleekest of sports cars and vintage Detroit behemoths restored to more than mint condition represent a multifaceted approach that cuts across the cultural spectrum.”

“…She just waves that chromium wand and distills all that she surveys into the glossiest depictions of exotically machined metal imaginable.”

“…what’s beyond dispute is Lockwood’s ability to recreate in oils that reflective chrome sizzle — the mystique of elaborately machined metal, the aura of speed and the visceral excitement it conveys.”

2006
“Two Painters Woven Together,” College of the Mainland, Galveston, TX
“Portraits in Chrome,” Grosser and Company Gallery, Carmel, IN